PRESERVING AND ROOTING PLUMERIA CUTTINGS WITH PLASTIC WRAP
Mark Terrill – December 2010
ABSTRACT
Different methods of wrapping to minimize dehydration of plumeria cuttings were evaluated. It was determined that plastic wrap is very affective at maintaining the weight of cuttings and avoiding shriveling during long winter storage. The wrap method recommended does not interfere with the cuttings coming out of dormancy, allows for inspection and speeds rooting. The method was applied to fresh cuttings during the growing season. The method can also be used to re-hydrate and feed cuttings prior to rooting. Risk and risk management is discussed.
PURPOSE
Well hydrated cuttings can better transport components needed to manufacture proteins that fight infection or supply new roots and growth. Well hydrated cuttings will start roots sooner and develop first roots faster.
Because we heat our homes in winter the air drops in humidity and becomes thirsty for water. Cuttings stored over winter this way can have significant shriveling.
Methods of wrapping cuttings to prevent dehydration were evaluated.
PROCEDURE
Nearly two hundred cuttings were taken by the first week of December 2009. The cuttings were stored indoors to be rooted the following April.
Group A were cuttings that were not wrapped.
Group B were wrapped in newspaper going around the cuttings roughly three times.
Group C were wrapped the same way with newspaper but had rubber bands around the paper at each end.
Group D cuttings were wrapped in plastic wrap pulling and twisting the wrap tightly around the cuttings with at least two layers.
Group E was wrapped with plastic wrap the same way but had rubber bands sealing the ends of the rolled wrap.
With all the wrapped cuttings the tips and ends of the cuttings were allowed to extend beyond the wrap. It was preferred the cut ends continued to have fresh air to keep them dry. In the spring, photo receptors in the epidermal layer determine that the days (photo periods) have become long and the cuttings become active.
Artificial light was neither used to extend the natural winter photo period nor to brighten the natural lighting. Soft indirect light was available through nearby windows. Room temperature was typically 65 F.
EVALUATION OF STORED CUTTINGS
By April the cutting groups were evaluated. Cuttings were only evaluated by sight and feel. The postal scale had quit working and there was no other scale with the sensitivity that would be adequate.
Group A had considerable dehydration with obvious shriveling and had become significantly lighter in weight.
Group B was essentially the same as Group A as it was hard to determine if the unsealed newspaper wrap did any good.
Group C, newspaper with sealed ends, seemed to be slightly better than Group A under close scrutiny but the improvement was not immediately obvious.
Group D, with the plastic wrap, showed no obvious shriveling and was significantly heavier than Group A.
Group E, with the rubber bands sealing the ends of the plastic wrap was clearly better than Group D with both weight and firmness.
NEW CUTTINGS FOR ROOTING
In the summer of 2010 through September 2010 plastic wrap was used on new cuttings to be rooted. Some cuttings were not wrapped. Wrapped cuttings maintained their weight much better as expected.
Judgment enabled by years of rooting experience and past experience with most of the cultivars indicated the pace of rooting benefited by the wrap. While dates of interest were recorded there were neither adequate control groups nor records of cultivar type, cutting length and before-and-after weights to adequately quantify the comparison of methods.
PLASTIC WRAP AS A ROOTING ENCLOSURE
Other prior test have demonstrated that cuttings only need humid air space to send out roots and that the cuttings will supply adequate moisture into any small enclosure to both establish and maintain humid air. 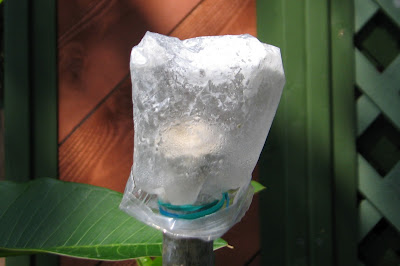 Figure 1
A previously dry air bag has become wet in only a few days.
A number of cuttings were rooted with only plastic wrap over the cut ends.
The problem with this method is the roots follow the folds or spiral of the plastic wrap and removing the wrap without root damage is difficult.
The photo of my dog Snickers is of one such plastic wrapped rooted cutting. 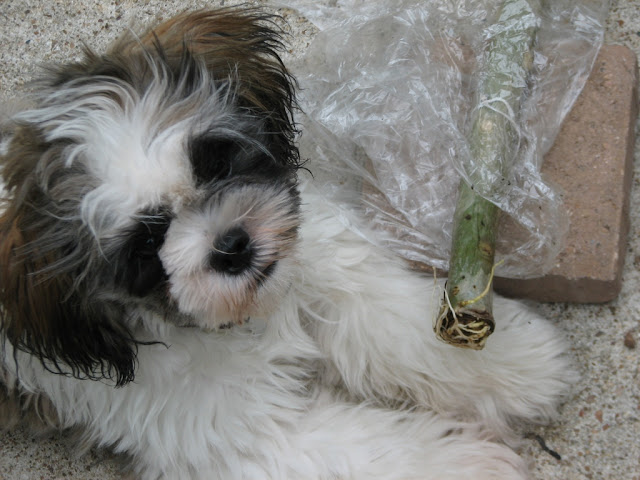 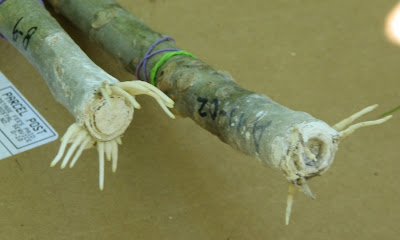 Figure 4 – Photo taken October 6, 2010.
Cuttings taken August 9 and August 2, 2010 were wrapped with Saran wrap and rooted in air bags.  It is not recommended to allow roots to grow this far in an air bag because the roots may gather condensate, become drenched, turn black and die.
RE-HYDRATING AND FEEDING CUTTINGS
With tub soaking of cuttings prior to insertion into a rooting medium the dried cut end becomes wet.
As an alternate to tub soaking a wet plastic wrap method was used. Some of the over wintered cuttings of Group A, B and C were used. Carl Pool Rose foliar feed and either Super-thrive, Vita-zyme or both were added to water according to the product instructions. A sprayer was used to apply the solution. The cuttings were sprayed until dripping wet. The inside of the plastic wrap was sprayed just before the first wrap was made. The wrap made from 2 to 3 passes around the major portion of the cuttings and the ends sealed with rubber bands. The cut ends were allowed to extend beyond the wrap and remain dry.
Cuttings were allowed to remain wet over night without issues. Some cuttings were allowed to remain wet in this way for up to two weeks resulting in some rotting (black soft tissue) at some of the leaf scars.
It is unclear if this treatment helps to speed rooting as there was no control or comparison group, cuttings varied significantly in size and cultivar type. Some cuttings had their weight measured before and after soaking with a postal scale without any measurable increase in weight. The resolution of the postal scale is 1/4 of an ounce.
RISK MANAGEMENT
Cuttings that show some untreated necrosis at leaf nodes or anywhere on the epidermal layer should not be wrapped. Even if the cutting surface and plastic wrap is very dry, the humidity level between the wrap and cutting will climb supporting the necrosis.
Uses of plastic wrap to soak cuttings with water and foliar feed should not exceed 12-hours. After cuttings are soaked with this method, they should be closely inspected for developing necrosis, quickly drying and treating any infected areas.
Plastic wrapped cuttings expose to direct sun light in warm weather will suffer serious damage as the temperature within will cook the latex killing the tissue. Brief periods of direct sun exposure are okay especially during cool and windy days of early spring. Once the weather warms and the sun is more directly overhead the plastic wrapped cuttings should only get indirect sun, dappled light or brief early morning direct sun with shade for the rest of the day.
Cuttings in air bags should be checked often to assure condensate has not drenched the cut end resulting in black rot. The new white roots more often than not gather condensate until they become wet, turn black and die.
Upon the first sight of roots emerging the cuttings should be placed into a medium that can sponge away excess water. This can be in pots, rooting tubes or rooting bags.
The primary purpose of a rooting mix in a rooting bag, other than filling the bag, is to assure moisture stability while providing ample air spaces of humid air. Initially the cutting can provide more than enough moisture for both first roots and the air spaces. The mix should be moisture neutral, have only enough dampness so as not to dry out the air and not so much water that it can not sponge away any accumulation of water on the cut end or roots.
Occasional condensate on the inside of the bag is normal and acts as a reserve of moisture. This reserve of moisture is useful initially for when temperature changes causes the air to become thirsty and later when new leaves cause the roots to remove moisture from the bag. 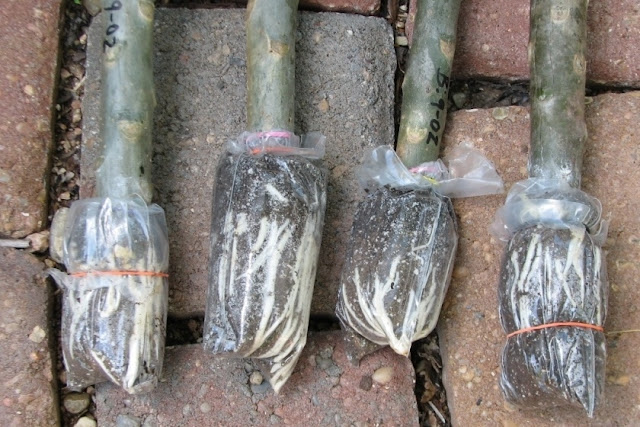 Figure 5 – Photo taken September 24, 2010. Cuttings bagged on September 02, 2010 have filled with roots in 22-days. The rooting mix protects the initial roots from becoming drenched in condensate and supports the humidity of the air spaces. Once well rooted the mix becomes dry but root damage from dry air is avoided.
FURTHER STUDY
Studies using control groups and data records are needed to support whether soaking in plastic wrap is as good as tub soaking and to what extent either method is an improvement over no soaking at all.
Experiments with various conditions could indicate how to keep water from forming on new roots within an air filled rooting bag.
Posted by The Plumerian at 7:11 PM